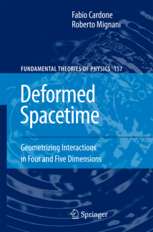 An Introduction to Deformed Special Relativity

This volume provides a detailed discussion of the mathematical aspects and the physical applications of a new geometrical structure of space-time, based on a generalization ("deformation") of the usual Minkowski space, as supposed to be endowed with a metric whose coefficients depend on the energy.
Such a formalism (Deformed Special Relativity, DSR) allows one

Moreover, the four-dimensional energy-dependent space-time is just a manifestation of a larger, five-dimensional space in which energy plays the role of a fifth (non-compactified) dimension. This new five-dimensional scheme (Deformed Relativity in Five Dimensions, DR5) represents a true generalization of the usual Kaluza-Klein (KK) formalism.
The mathematical properties of such a generalized KK scheme are illustrated. They include the solutions of the five-dimensional Einstein equations in vacuum in most cases of physical relevance, the infinitesimal symmetries of the theory for the phenomenological metrics of the four interactions, and the study of the five-dimensional geodesics.
The mathematical results concerning the geometry of the deformed five-dimensional spacetime (like its Killing symmetries) can be applied also to other multidimensional theories with infinite extra dimensions.
Some experiments providing preliminary evidence for the hypothesized deformation of space-time for all the four fundamental interactions are discussed.